Whilst thinking of new ideas for a blog, I remembered a feature on Sara Cox’s afternoon show on Radio 2 called First and Last. Basically, a listener sends in details of the first and last concert/gig they went too, and Ms. Cox would follow the discussion with a couple of songs from the artists. So I’m going to essentially rip off the idea, but instead of concerts, I’m going to talk about records, with an added twist. This will be the stories behind the first and last record that I bought plus, what I like to call, my ‘favourite find’. A record that I found in some random shop that remains in my favourites to this day. So lets get on with it and start with the first record I ever bought.

I was 13 when Master of Puppets came out (showing my age now!), but initially it wasn’t the music that sold me on the album, it was the fact it was a picture disc vinyl. I hadn’t heard of Metallica but that didn’t matter, I had fallen for heavy metal and vinyl was way cooler than tapes, even though I didn’t have a record player. On side A was this amazing picture of a pair of hands with strings manipulating a host of gravestones, the artwork just grabbed me like the two hands in the picture. On the B side was four crazy guys all sweaty and snarly, giving 100% in front of thousands of fans. As it turned out it was, and still is, an amazing album, arguably their best. 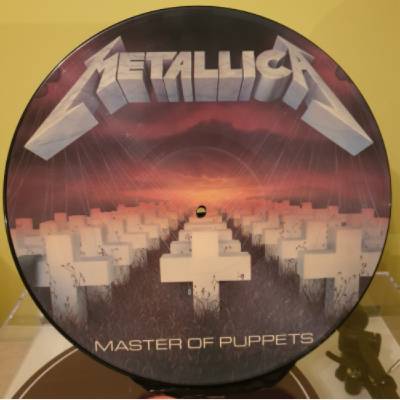 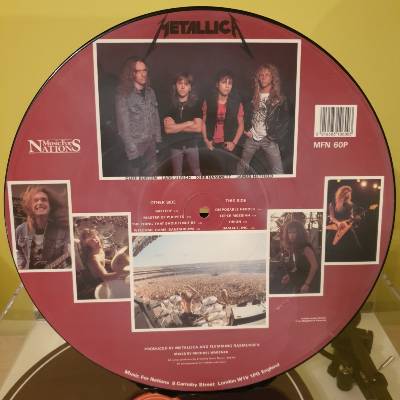 In my early school years, I never drifted far from the pop music of the charts, or the albums my parents would play at home, all I did know was I didn’t like the Beatles (controversial!!). On joining secondary school, I was introduced to the guitar laden sounds of heavy metal music by some of the older kids. The speed, the anger, and the power soon had me hooked, and is still probably one of my favourite genres to this day. Taping may have been killing music (or was it CD’s? Or was it streaming? I lose track) but that didn’t stop me copying every tape I could get my hands on. I still have a lot of those tapes, especially my copy of ‘Live after Death’ by Iron Maiden, with a jump in the song ‘Powerslave’ where someone tripped over the power cable whilst I was copying it. I still expect that jump to be in the song whenever I hear it.

I went to school in Loughborough. On Saturdays, I would always head for the two record shops in town, Our Price and The Left Legged Pineapple; which sadly now only exists online, but in its day was the best place to buy vinyl records. You could spend hours digging through all of the records they had in stock, whilst hoping the new record you wanted on the wall would still be there once you had saved enough money. I hadn’t planned to buy ‘Master of Puppets’, I hadn’t even planned to buy a record that day, I just loved hanging out in the shop, but there it was in a rack of new arrivals by the till. Most record buyers will know that feeling when you see a record you just have to buy, well this was my moment. Did I have enough money, no! Could I convince my friend to lend me another pound on the promise that I would give him two pounds back? You’re damn right I did.

The 1980’s were the height of the original picture disc era, mostly they were round albums, but shaped picture discs started appearing as well, and I bought loads of them in my school years and beyond; Iron maiden, Guns n Roses, Anthrax and Soundgarden, to name a few. Metal bands just seem to be drawn to the idea of picture discs, maybe because their cover artwork is always so visual and works really well on the format. The quality of the playing surface in those days wasn’t as good as it is on today’s picture discs, but back then you couldn’t tell the difference. I still have the ‘Master of Puppets’ picture disc but sadly it has a scratch on one side, so it doesn’t get played as much as the black vinyl version I bought later. Due to the scratch it probably doesn’t have much sale value but to me it’s priceless.

Like all music, certain songs or albums take us back to a time and place in our lives, for good or for bad. For me ‘Master of Puppets’ was start of a long musical journey with vinyl records that continues to this day. From those early metal albums, through my twenty’s buying stacks of dance music on 12” singles, to the starting of Travelling the Groove Records.

Well that was a little bit longer than I expected when I started writing this but that was my first record, the next instalment will be the last record that I bought and it’s a little bit different from the thrash metal sounds of Metallica.